Bobin is a small town near to Ellenborough Falls, New South Wales. Eire Constructions was engaged by Mid Coast Council to raise and relocate the existing road, with some sections being raised by 4m.

The project benefits to the region will prevent the road from flooding, reduces the size of the bends and removes the blind corner. This provides a safer route of travel for the locals and tourists.

Construction of the new 420 metre long road involved placing a large amount of rock along dish drains and batters to prevent scour from potential flooding.

As the road was open to the public during construction this added a level of complexity to the project. Eire Constructions managed traffic control and implemented three construction stages to ensure minimal disruption.

“Eire Constructions were meticulously diligent regarding Environmental Controls due to the Creek being between both approaches. Construction was completed in a timely manner with a quality finish.The team constructed new road approaches to the new bridge within a project timeframe of 2.5 months,” said Eire Engineer, Nick Harvey.

With no mobile service onsite a satellite phone was required for communication. The long distances from major towns required good coordination between the Site Manager and suppliers.

“Wet weather delayed the project, however with timing of works and asphalting crew, we were able to complete works in between storm events,” added Nick.

Traffic Management was essential during a number of construction stages to prevent any delays to the public.

The project team included five people and a number of Eire Constructions machines including an excavator, posi and grader. Approximately 4300m3 of dirt was removed in construction.

Eire Constructions would like to thank our client Midcoast Council, the local residents adjacent to the Project and the residents of Bobin town for their patience during construction. 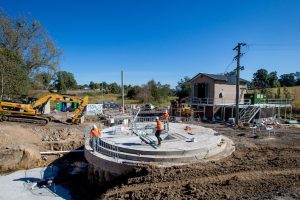 We are dedicated to continuous improvement and staying at the forefront of the rapidly evolving water industry.